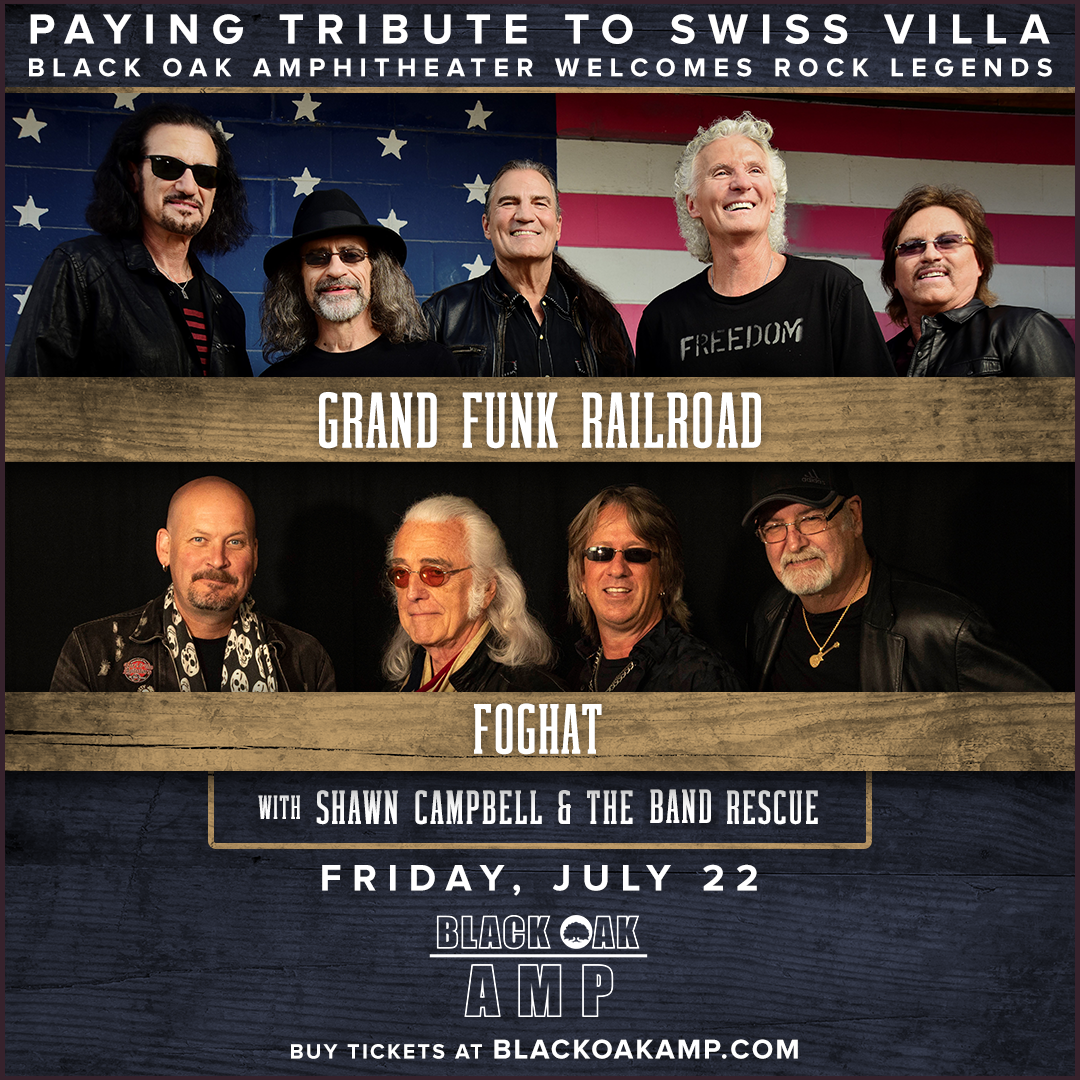 Black Oak Amphitheater is paying tribute to the rich history of its roots by carrying on the tradition of the iconic amphitheater. Swiss Villa Amphitheater hosted the biggest names in music making special memories for thousands of concert goers. It is capturing those memories by reliving those good times and taking you back to the good ole’ days with rock legends Grand Funk Railroad and Foghat! Guaranteed to get your ‘foot stompin’, there’s no doubt there will be many new memories made!

Grand Funk Railroad, known as “The American Band”, has a legacy that still reigns over the Classic Rock landscape more than fifty years after its 1969 birth in Flint, Michigan – a testament to the group’s influence and staying power. Mega-hits We’re an American Band, I’m Your Captain/Closer to Home, Locomotion, and Some Kind of Wonderful continuing to chart and Classic Rock radio. And We’re an American Band has received notoriety in recent years being used in movie soundtracks and in television/radio advertising.

Over their career, Grand Funk has had 19 charted singles, eight Top 40 hits and two number one singles (We’re an American Band and Locomotion, both selling more than one million each). The group has now accumulated 13 gold and 10 platinum records with record sales in excess of 25 million copies sold worldwide. The most recent gold CD award was presented to the band for their greatest hits package Grand Funk Railroad the Collectors.

Foghat is known for their hit songs, Slow Ride, Fool for the City, and I Just Want to Make Love to You. Formed in 1971 in London, Foghat combines an eclectic blend of rock and blues tied in with a little funk and R&B. They have eight gold records, one platinum record and one double platinum record. For more than four decades, the group has transcended through generations and attracted fans of all ages.

Their live show is as intense as ever with the incredible energy and musicianship that one would expect and hope for from a seasoned band with such a long musical history and they are bringing their fans along for the ride. Foghat’s live performances show why the band is still around today and why they will be able to keep on rockin’ as long as they want. This band truly is timeless.