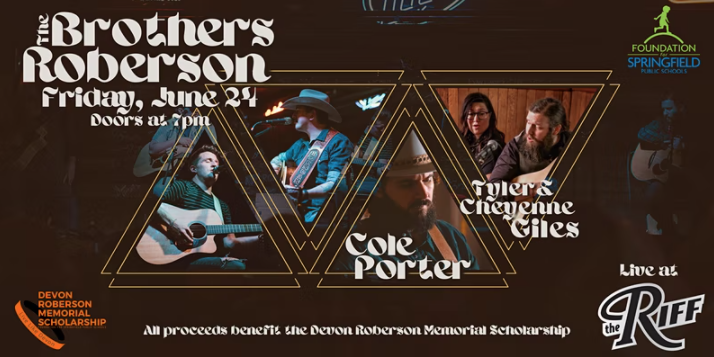 ***All ticket sales benefit The Devon Roberson Memorial Scholarship with the Foundation of the Springfield Public Schools . Each year a Springfield Public Schools high school senior receives this scholarship to help with their first year college expenses. The goal is to continue to raise funds annually to eventually offer more scholarships that help support more music students in our community!***
The Brothers Roberson are a dynamic duo hailing from a family rich in country music heritage. Rhett Roberson is the lead singer and main songwriter for the team. He is accompanied by his youngest brother, Brendan Roberson, whose fine harmonies and instrumental asides prove a hard-to-match combination. Both of the brothers have their musical beginnings in the church. Over several years they grew up learning to sing and play for people on Sunday mornings. Soon those Sundays were following late Friday and Saturday nights singing the country music they grew up with. Eventually they found their way to Nashville sharing the stage with many country music acts that they considered their heros. In 2015 the Brothers were the National Champions of The Country Music Showdown at the Ryman Auditorium in Nashville, TN. Bolstered by this success (and one of those great big TV checks) the Brothers have had the chance to play stages all over the country and haven't been able to stop it yet... not likely happening any time soon either. Their influences have been very diverse, from John Mayer to Waylon Jennings, Ray Lamontagne to Garth Brooks. You never know what you might get from The Brothers Roberson, but there is definitely a little something for every listener.