Located on the outskirts of West Plains, the Moore home combines traditional architecture with timeless décor and a little Colonial charm. 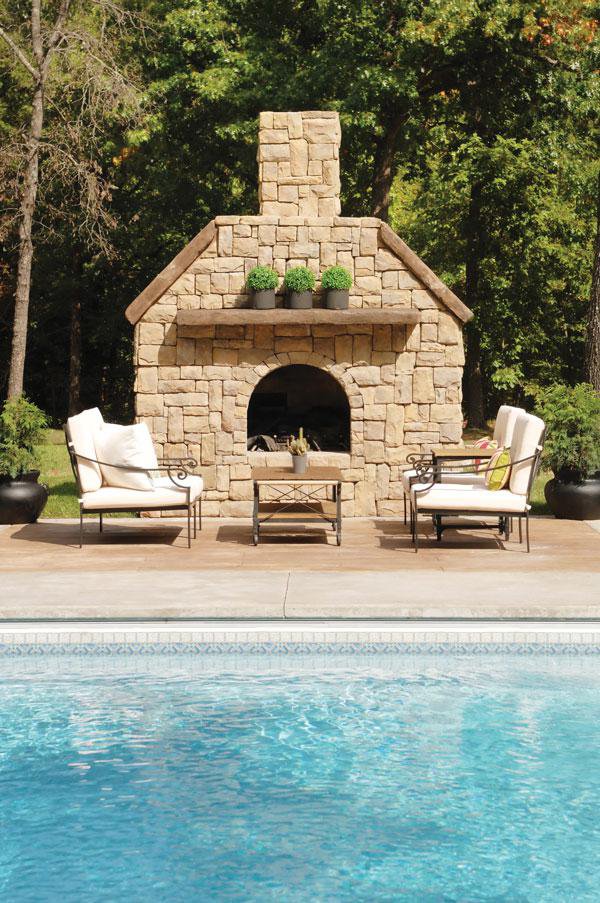 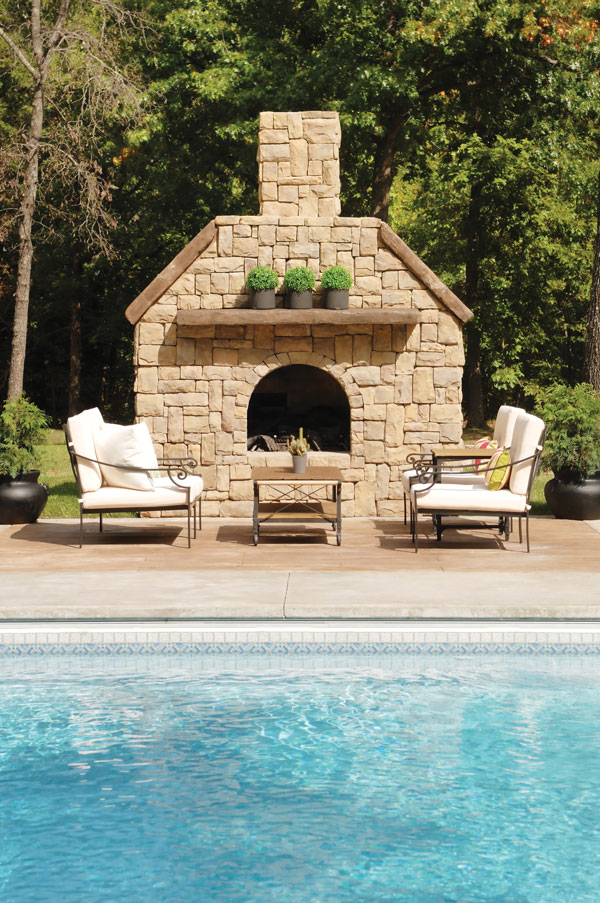 Repurposed Stone: After updating the front of the house, the Moores used leftover stone to construct an outdoor fireplace. “The exterior of the house has an Old World finish with sloppy grout work, but for the fireplace, we wanted a cleaner look,” Moore says. The gas fireplace is the perfect spot for the Moores to gather on cool summer nights, and since the pool is heated, the kids can take a dip, even when it’s still cold outside.

After Beverly Moore transplanted her born-and-raised country boy husband, Brock, to the cookie-cutter streets of suburbia, it wasn’t long before the two were yearning for more room to stretch their legs. When the opportunity arose to purchase 10 acres of undeveloped land near West Plains, the couple quickly began drawing up blueprints for their new home.

Brock’s dad is a builder, and Beverly owns her own interior design company, Interiors by Design (417-257-0601), so the project was a total custom build. Working from the ground up, the Moores slowly started constructing the house, keeping with their desired Colonial style. “We wanted the house to be timeless,” Beverly says. “The Colonial style has been around for hundreds of years without ever falling out of style.”

First finishing the house in 1996, Brock and Beverly tried to shy away from trendy designs and color schemes in hopes of limiting the number of remodels, but a few years later, Beverly was already tiring of the crème- and green-colored façade. “As much as I’ve tried not to, I’ve done remodels,” she says. From the breakfast nook to the front porch, the Moore house has survived many facelifts, and it finally shed its green and crème palette for a more traditional look five years ago.

The addition of the massive front columns and stone siding gave the house the Colonial look that Beverly wanted, and on the inside,
Beverly put her decorating talents to work. Spending most of her days lost in a whirlwind of paint samples, fabric swatches and magazine clippings,
Beverly designed the interior of the home to be cozy and calm. But she also wanted each room to be
inviting in order to fit the family’s busy entertaining schedule. The result is the ultimate blend
of comfort and style. 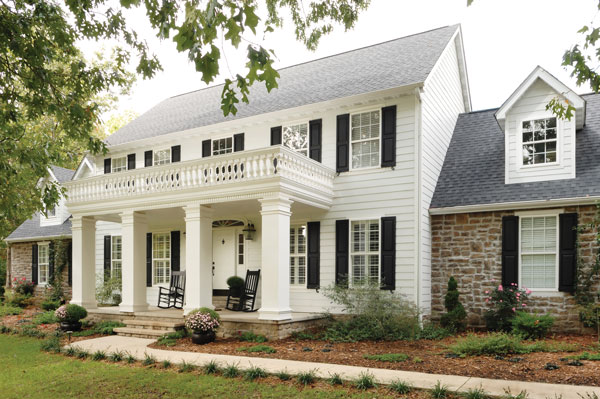 A Dash of Southern Charm When Beverly and Brock first built the house in 1996, the home had cream-colored siding, a green roof and green shutters. Eventually, she tired of the green, so six years ago, the couple redid the front of the house, adding the columns, front porch, a three-car garage and a rec room. Two rocking chairs add just a touch of southern charm to the picturesque home. 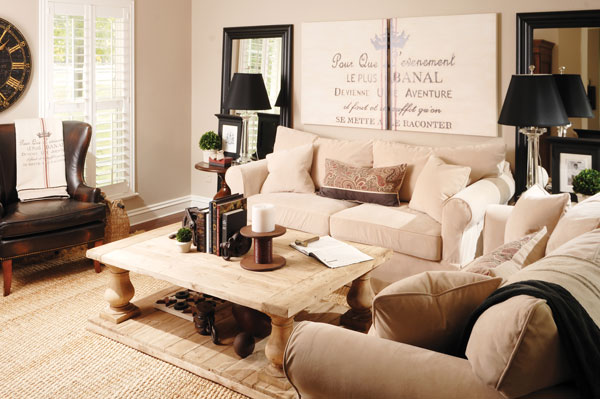 The Beauty of Beige Throughout the house, Beverly uses neutral tones to create a calm and tranquil atmosphere. The living room is a great example of how Beverly uses black accents to make the color of the couches and walls stand out. “I love colors,” she says. “And I love to do other people’s homes in color, but because my days are so busy, I like to come home and have soft, calming colors.” 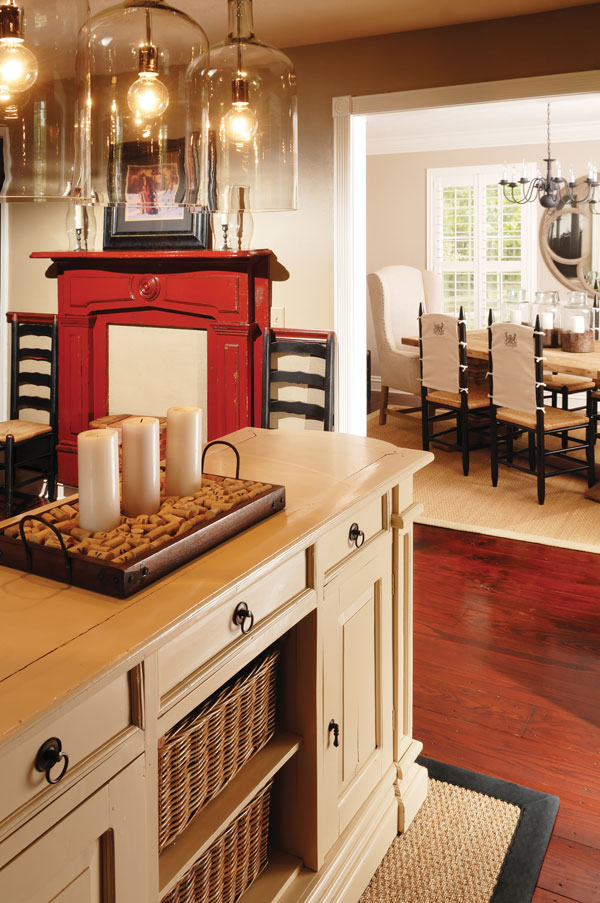 Country Inspired  The kitchen was remodeled seven years ago. Sticking with the muted color scheme, Beverly added some pops of red to the kitchen with red mahogany floors and an antique mantelpiece she found at an antique store. Amazingly, when Beverly found the mantel, it was already painted that bright, New England red. “It acts like a focal point, and I can put photos and candles on top,” she says. Its vintage look goes well with the bare-bone lighting and wood-plank floors. It’s a mixture of vintage hardware and modern convenience. 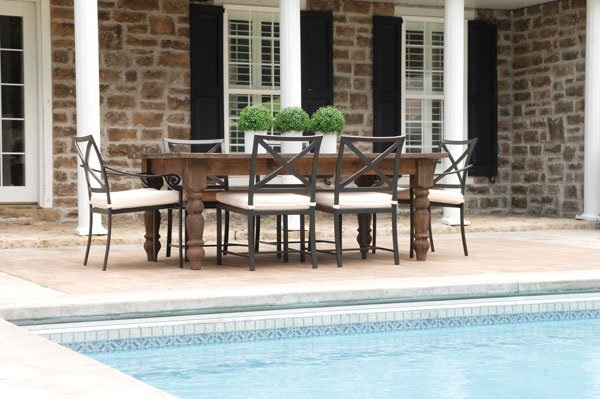 Poolside Dining  The pool was added to the yard two years ago and has become a favorite place to relax and enjoy meals during the summer. It’s also become a gathering place for the Moore family and friends. Beverly likes to joke that, for a long time, Brock didn’t want a pool, and it was only because he fell in love with the idea of having a hammock that he ever agreed to having a pool. “I said, ‘It’s silly to have a hammock and nothing else in the backyard,’” Beverly says. “So I said, ‘A pool would make it better,’ and he said, ‘Okay.’” 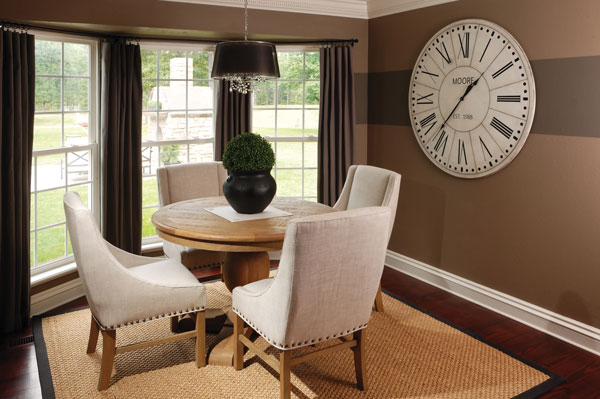 Breakfast Hideaway The breakfast nook creates a cozy space to enjoy a cup of coffee while watching the kids swim. The nook is one of the rooms Beverly recently redid, and as part of the remodel, she ordered the massive clock that now hangs on the right wall. Beverly has a thing for oversized clocks, with many other massive timepieces peppered throughout the house. This particular clock is four feet in diameter and reads “Moore, established in 1988”—the year Beverly and her husband got married. This seems like the perfect way to keep her husband from forgetting their anniversary, but Beverly jokes that she’s the one who always forgets the big day. “It needs to have an alarm,” she says.