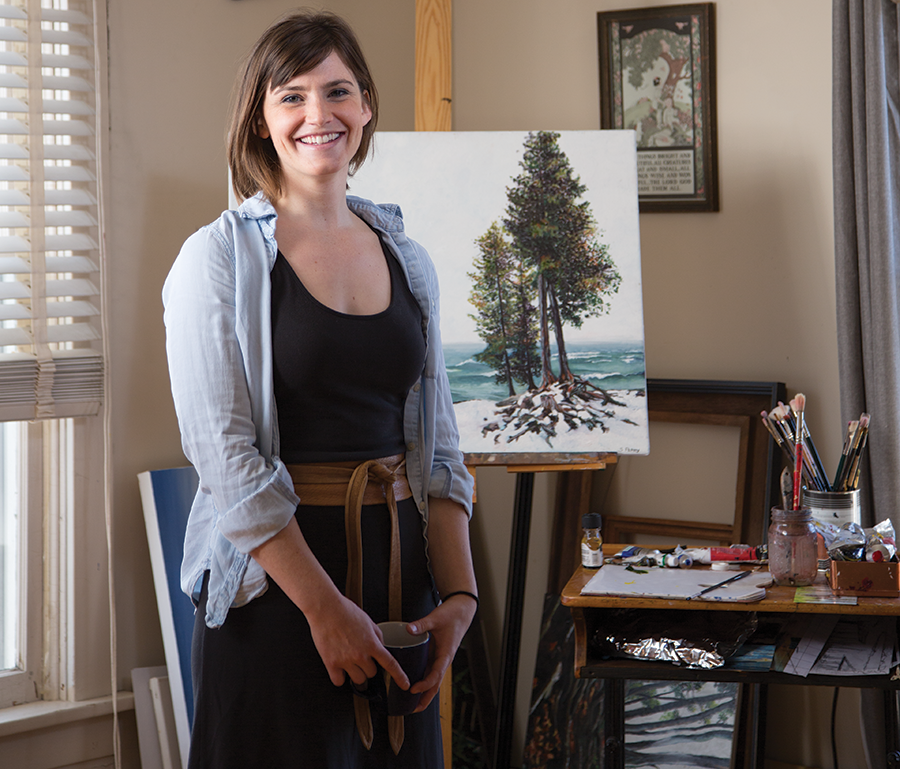 Perry’s work is inspired by nature, as seen in this painting, Cave Point in Winter.

Originally from Wisconsin and now a resident of the Ozarks, Sophie Perry’s paintings are inspired by the beautiful places she’s called home.

Sophie Perry’s work can be viewed at sophieperry.com. Perry can also be contacted for commission work via her website.

Wisconsin’s loss was Missouri’s gain when Sophie Perry moved from her home state to the Ozarks two years ago. Her boyfriend, a Joplin native, was beginning a new job with Bass Pro, and Perry says the move was welcome, especially after a couple of particularly punishing northern winters.

A native of Monroe (near Madison) and graduate of Beloit College, Perry never formally studied art but has been painting since she was in middle school. She’s done commission work consistently since college and recently had her first show in Springfield—a narrative series of oil paintings focusing on her longtime favorite vacation destination: Door County, in northern Wisconsin.

An English major at Beloit, Perry likes to incorporate narratives in her work. “It’s not necessarily traditional portraiture,” she says. “I like painting a person and having them be the focus, and be very influenced by the space around them. Someone’s in a train car. Where are they going? What are they thinking? Why is it so dark?”

Travel is a major inspiration for Perry, who says, in her opinion, composition is the most important element in a successful painting. “I think a lot of my work is based in other places that I’ve been to,” she says. “I like thinking artistically and not being in the regular routine that I’m in every day.” 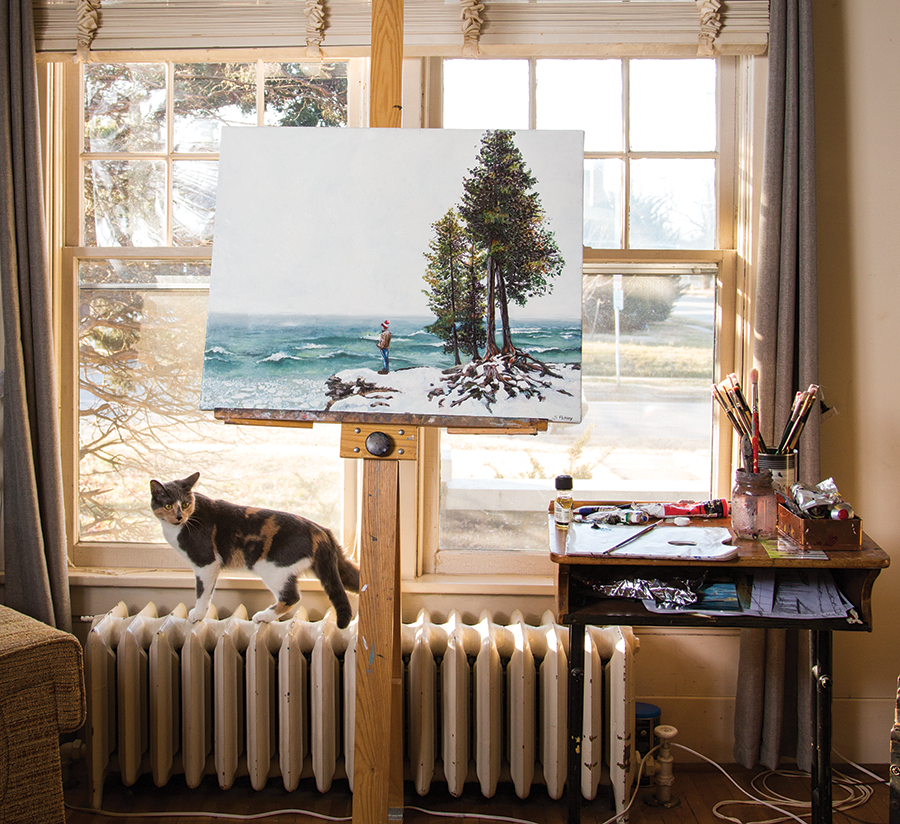 And while Wisconsin will always have her heart, Perry is interested in beginning some work on her newly adopted home in 417-land. She’s painted a couple of pieces already—one favorite, titled Ozarks through the Trees (which can be seen on her website home page), was done for local design firm Buxton Kubik Dodd Creative.

“Much of my work includes elements that feel very northern: old wood stoves, snow on the ground,” Perry says. “The Ozarks landscape is not remarkably different but it does have a different feeling and its own essence—its own appeal.” 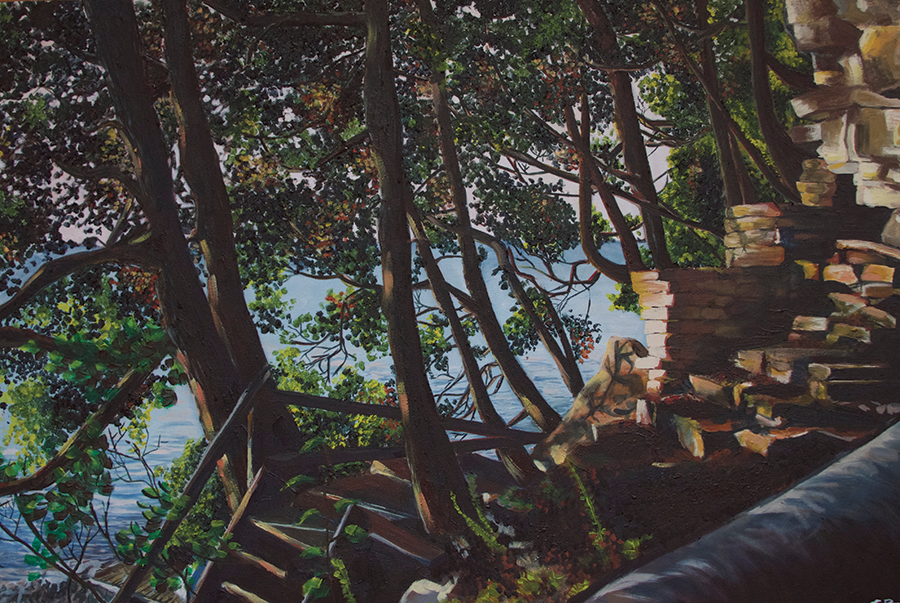 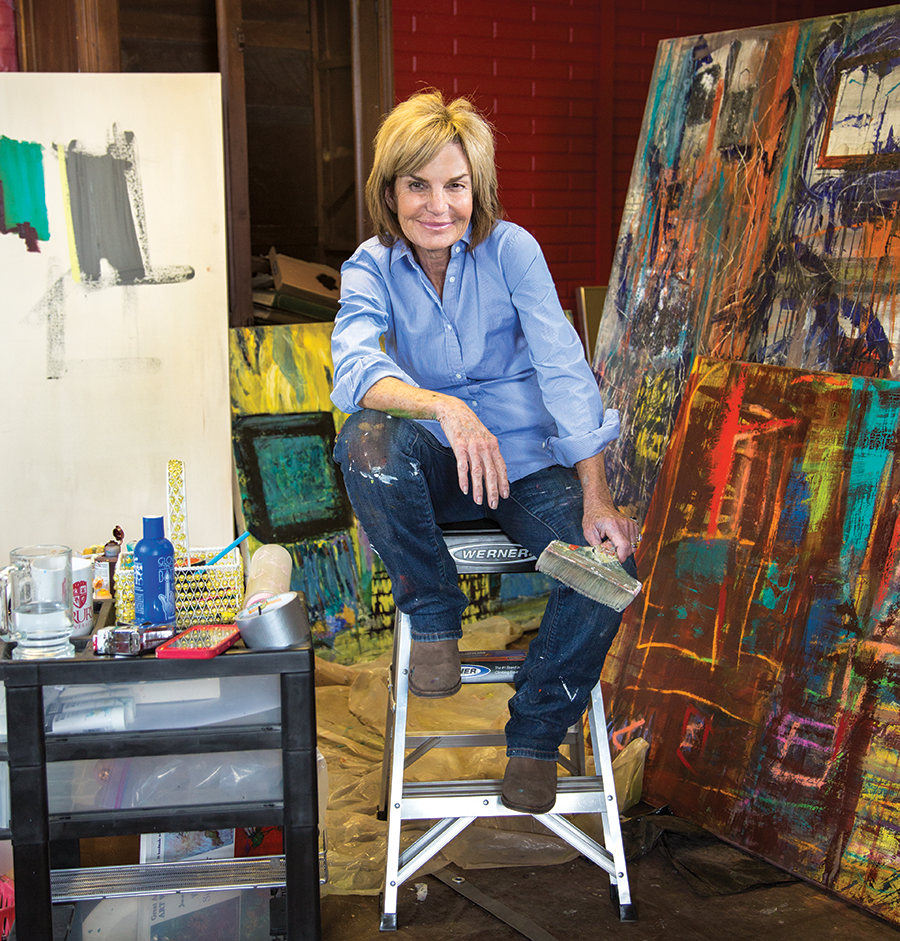 Betty Parnell is finishing her Master of Arts degree at Drury,  and applies what she learns when she paints in her home studio.

Meet Betty Parnell: a Springfield artist who discovered her passion for painting in her early 60s.

Some artists are born and others are late bloomers, and that’s actually a very apt description of Betty Parnell.

A longtime gardener and lover of flowers and color, the 67-year-old Springfield woman had never painted until she audited a course with Drury professor Todd Lowery five years ago. She thought she was signing up for a basic course that turned out to be advanced.

“I bought all my stuff and paints and I just started,” she says. “You know, it was pretty ugly but just a start. But then I started playing and realized that I was really abstract, and the more I played the more I realized there just may be something there.”

Freedom. Adventure. Challenge. Color. Risk. Unique. Energy. Passion. Emotion. They are all words Parnell throws out when asked to talk about creating art. She laughs when she remembers another Drury professor and mentor, Tom Parker, telling her to “paint big.”

“Every painting I finish is a street fight,” she says. “When I hit the canvas I don’t know what I’m going to do.” Sometimes she makes mistakes, or doesn’t like where the work is going. And that’s when she really gets into it.

“In life you can’t correct a lot of your mistakes. Even though you’d like to have do-overs, you can’t always do that,” Parnell says. “But with painting, if you’re stuck, you can put in the time and you can repaint it. It’s not a big deal.” 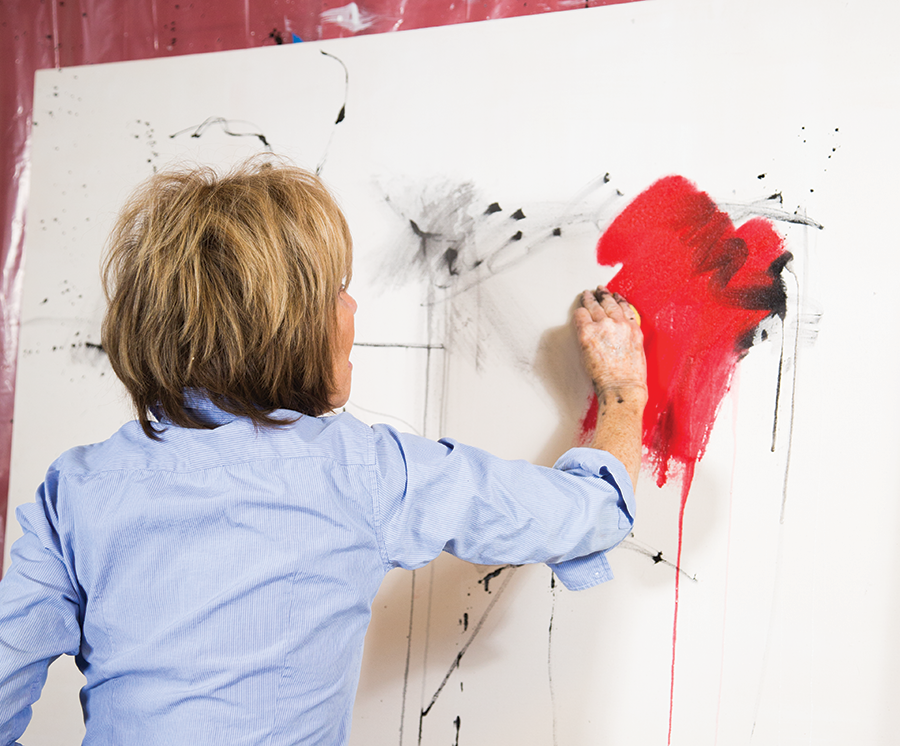 Large-canvas abstract art is Parnell’s style of choice, and her work was featured last November at the gallery at Obelisk Home in downtown Springfield. Besides a Drury student exhibition, it was a public debut for Parnell; she says it was a thrill to be selected by Obelisk and well-received by the art community, and even sell a few pieces. “I was mainly happy because, while I like my work, it’s everyone else’s entitlement to like what they want to like,” she says.

And while public validation is great, it’s the actual act of painting that affects Parnell so forcefully. Currently finishing her Master of Arts degree in Studio Art and Theory at Drury, she says she’d like to begin to explore sculpture this semester while continuing to paint. “I feel like I’m just at the tip of the iceberg.”

But most of all, Parnell says that she really wants all people—particularly those who may feel like they are beyond the point in their lives of being able to start something new or surprise themselves—to heed her story.

“You just never know what capability we have inside of ourselves,” she says. “For anybody at any time in their life, take the time to explore something that you’ve never done or maybe never even thought about. You might like it, and you might even be good at it. “You never know what lurks inside of you,” Parnell says. “Ever.” 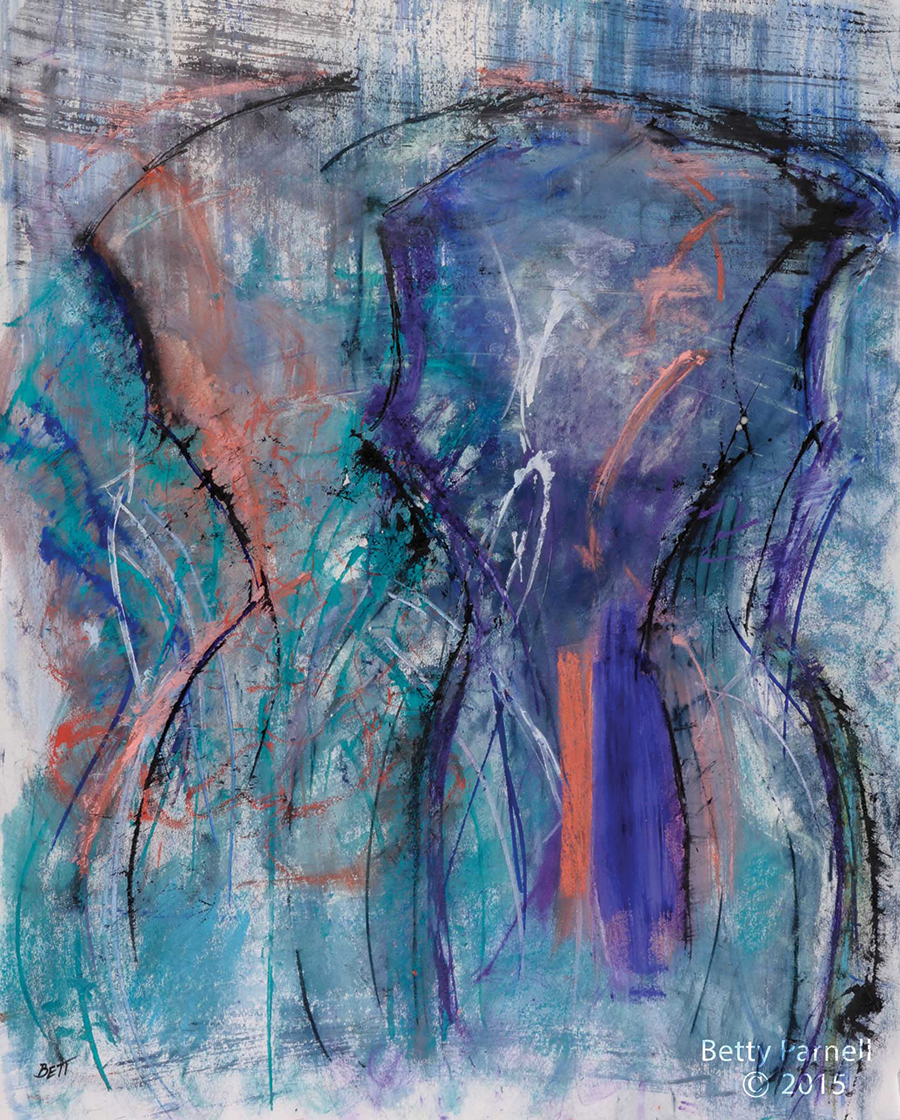 Window Shopping by Betty Parnell is 40”x 32” and is water color, pastel and acrylic. 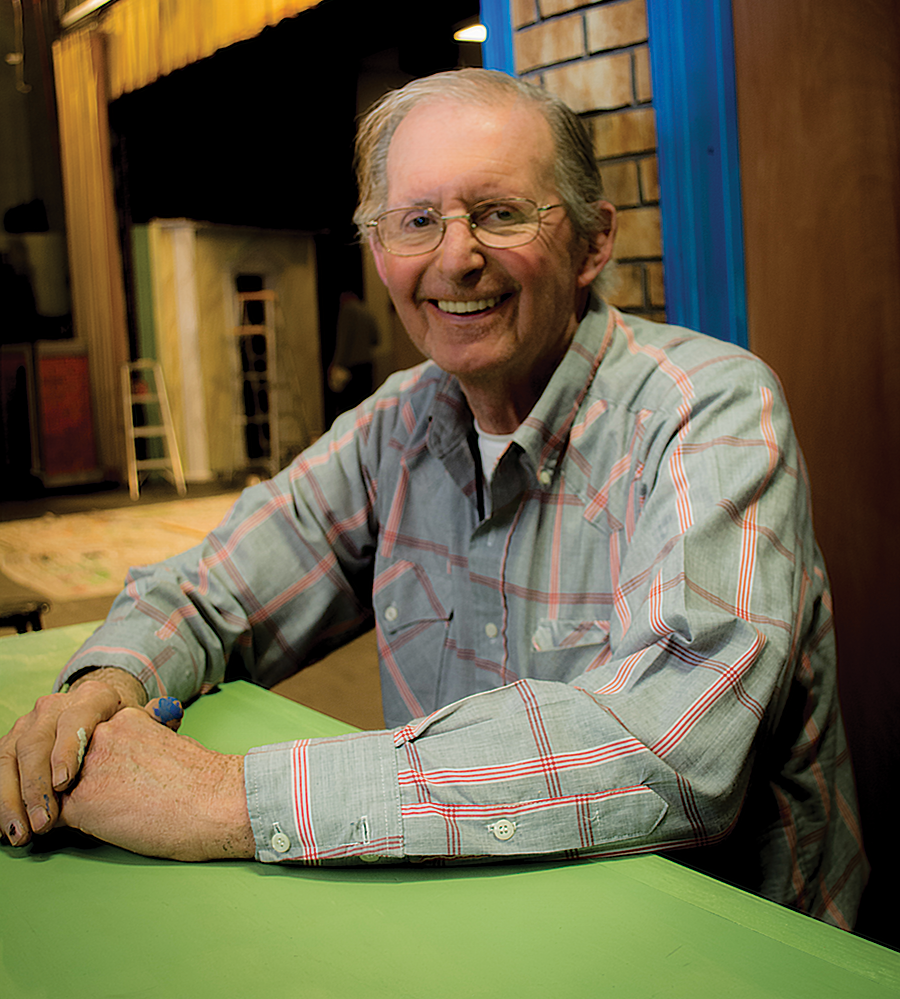 A Man of Many Talents

A designer, painter, sculptor and fabricator, Europe native Brian Rance has done work for Disney and designed for some of Branson’s biggest attractions. Now, he spends much of his time sculpting and painting from his home on the Galena town square.

It’s 1969. A young and talented advertising artist for a newspaper on London’s north end happens by the construction of one of the city’s finest new hotels, The Churchill. On a lark, he asks the project manager about providing paintings for the establishment. He’s invited to submit pieces for consideration, which—against all odds—get chosen. The commission opens the door to lucrative years working for some of Europe’s finest hotels. Then, carrying nothing but an artist’s kit and a harmonica, he embarks on a journey across the Americas. Years later—thanks to a rare breed of Japanese dog—the artist lands in the tiny Stone County town of Galena, where he spends 25 years working in set design for Branson’s biggest productions.

Sounds almost like a Disney script, right? No, but Brian Rance has had his art vetted by them, too. And it all started when he threw his art in the mix for that hotel. “The Churchill job was a big deal because I was so young,” Rance says, recalling his big break. “The press and TV took such an interest in it for that reason. I was a packaging designer for a newspaper.”

His decision to travel Latin and South America was a product of wanderlust. “I wanted to go to South America before it was developed any more,” he says. He traveled for three years through Central and South America, sketching and playing his harmonica for money. “You could say that was an irresponsible way to live, but if I could have my life again, that’s what I would do again,” he says.

Then, 25 years ago, married and living in Chicago, his wife at the time wanted a second Japanese Tosa, a rare breed not exported by Japan. The only breeder they could find was in Reeds Spring, Missouri. And so Rance’s introduction to the Ozarks was made.

The great thing about the Ozarks in the early ’90s: a need for artists in the Branson boom. Rance was a smash in theater design. His work has been on the Branson Belle and at Silver Dollar City, and for stars such as Yakov Smirnoff. 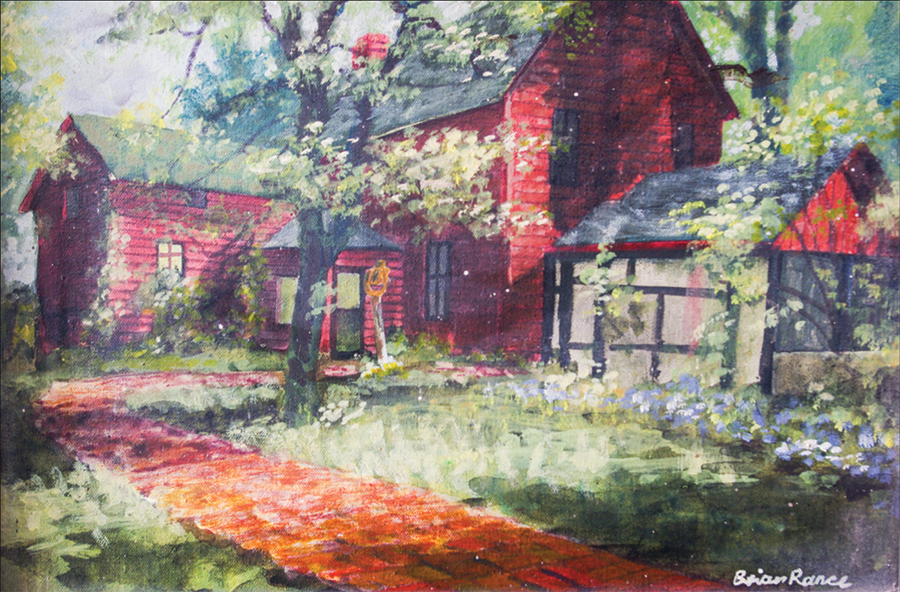 Rance’s painting Red House depicts the house in Illinois where he met his wife.

When he’s not working on these commercial projects, Rance spends time painting and sculpting at his home—a building on Galena’s square he bought to serve as his studio shortly after moving to the Ozarks. The studio features art from throughout his life. Much of his recent work has been for area colleges, working with students on set design. He says it’s one of the biggest rushes he’s had in his fascinating career. “I don’t have any family or children, so having teenagers want to be with me and wanting to talk—which is a rare thing in itself—is wonderful.”

Rance sells his work on occasion, when someone who wanders to his studio makes an offer. “Being an artist is an obsession and compulsion that I have,” he says. “I don’t know anything different. I’m living in a make-believe world, but it’s for me.” 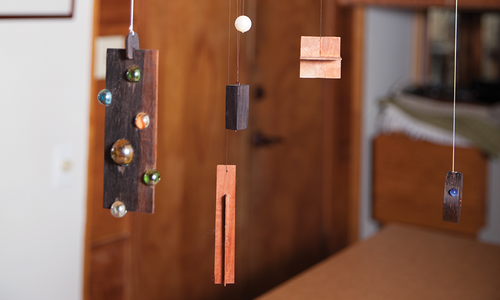 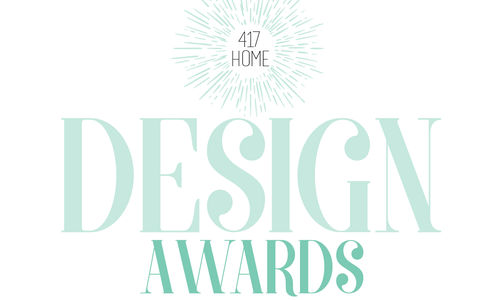 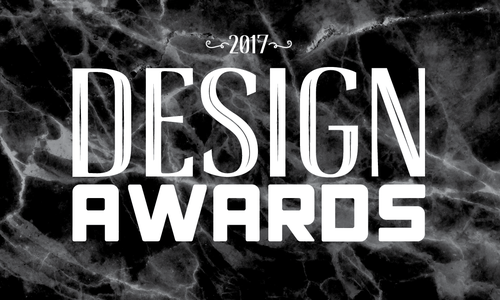