Between lush gardens and an English conservatory that's well suited for enjoying the outdoors year-round, you'll struggle to decide where to take your afternoon cup of tea in the Carolla's backyard. 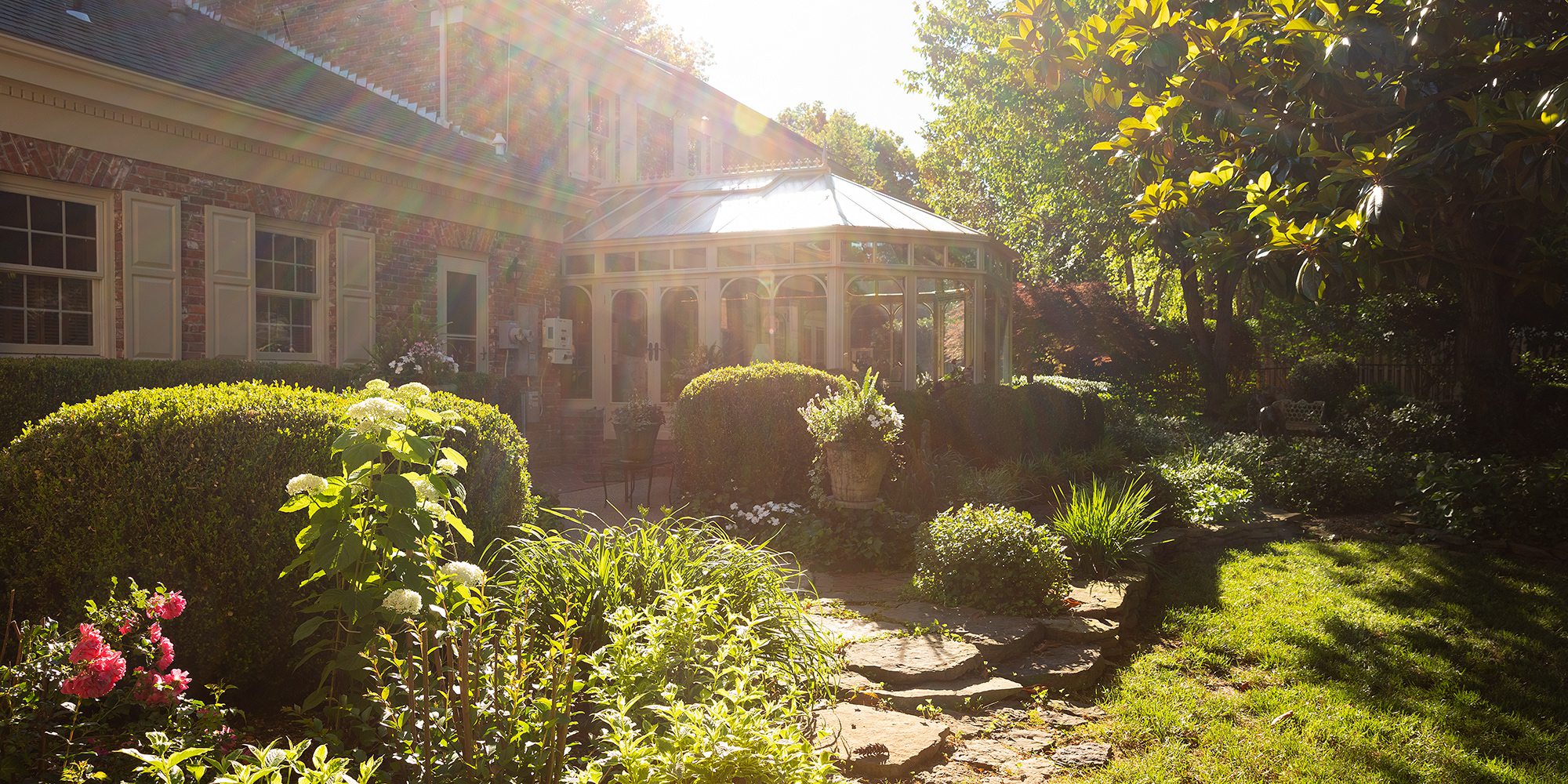 Photo by Brandon AlmsThe Carollas planted the southern Magnolia tree on the left after a lightning storm destroyed one of their maple trees. Peg is from North Carolina, so the tree is a nod to her roots. The brick used to build their home and the conservatory’s foundation also has a story. It was repurposed from a torn-down small-town schoolhouse. Purchase Photo

When the rain hits just right and the roses are in bloom, a moment with a cup of tea in Robert and Peg Carolla’s conservatory feels like an afternoon spent in an English countryside manor. In fact, the conservatory itself was actually manufactured in England and shipped across the pond in pieces. Although the footprint was completed locally, the nearest Americans qualified to put it together traveled from Chicago and spent three days working on the project in 2004.

The Carollas are self-proclaimed Anglophiles, and owning a conservatory of his own has long been Robert’s dream. These greenhouse-like additions are common in the British Isles. “The people who live there try to catch whatever little bit of sun they get,” Peg says.  “It is so rainy and gray so much of the time, so they feel the need to have some opportunity even when it is cold outside to be in the sun. That is one of the things we have enjoyed about our conservatory too.” And the unimposing-yet-elegant space has withstood the test of time. It’s going on 17 years old, and the Carollas have only had to perform one maintenance task just one year ago when a few of the glass panels lost their seal. 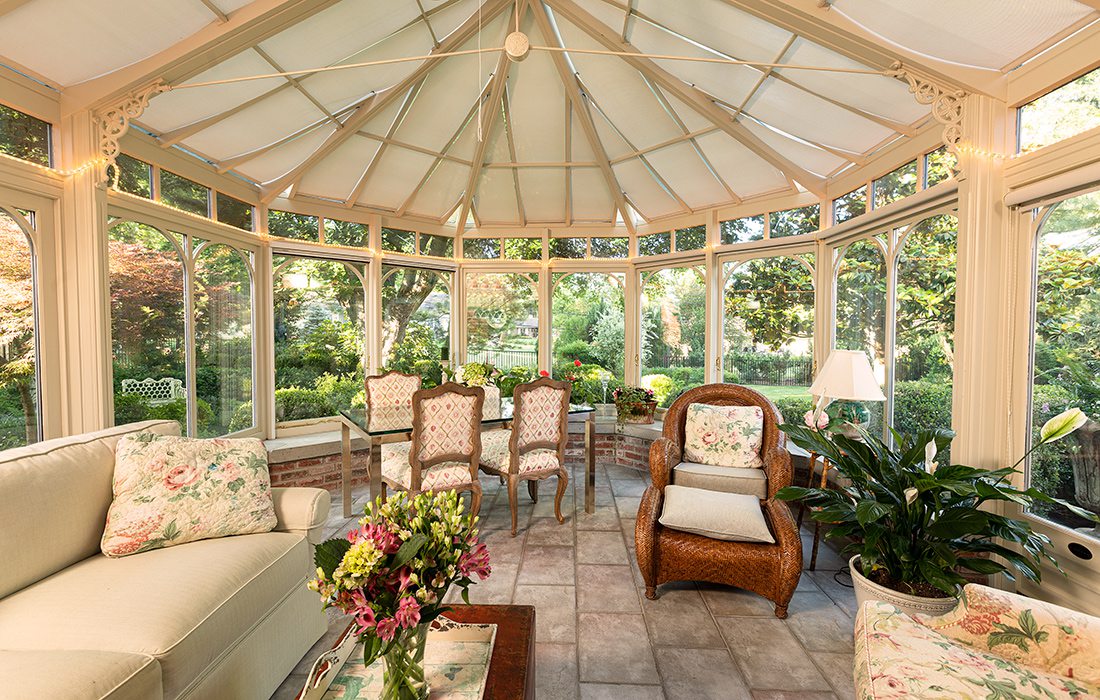 Photos by Brandon Alms“Sitting in the conservatory is a way of feeling like you are outdoors with protection from the elements,” Peg says. “We enjoy being out there when it is raining or when it is snowing. It is really magical.” Purchase Photo 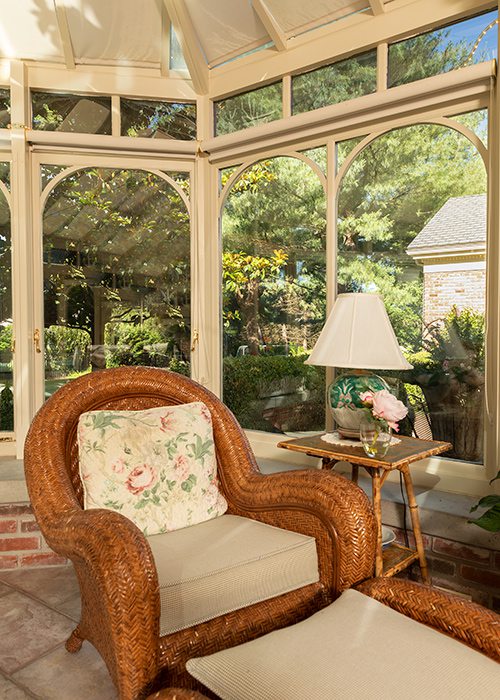 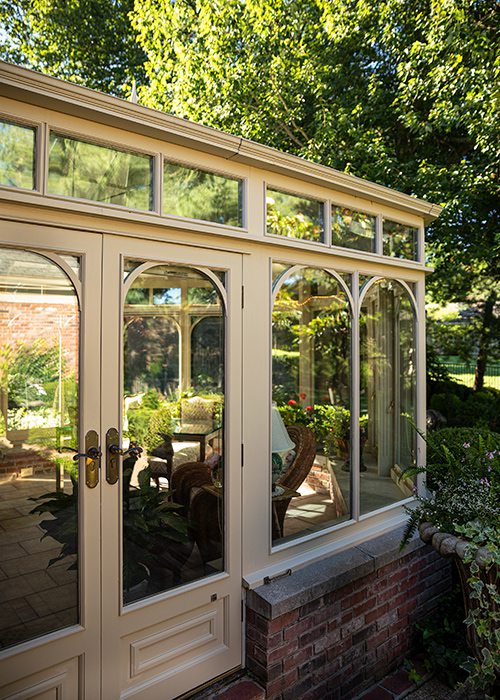 Photos by Brandon AlmsThe conservatory was manufactured in England and shipped across to the United States in pieces. Purchase Photo 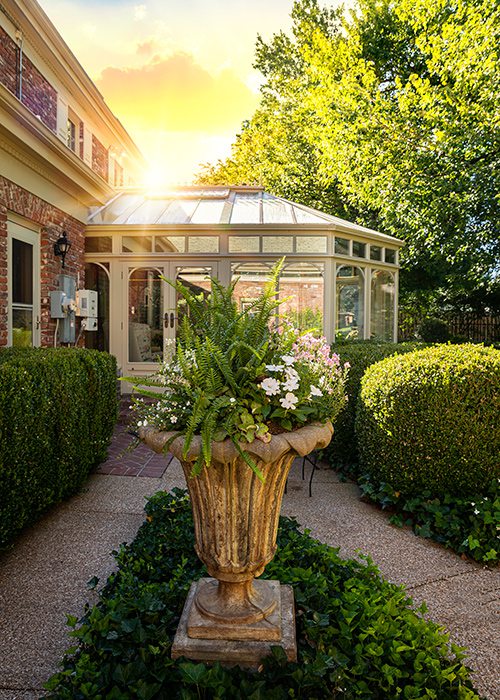 Photos by Brandon AlmsThe conservatory is a wonderful space for enjoying the sunshine year-round. Purchase Photo 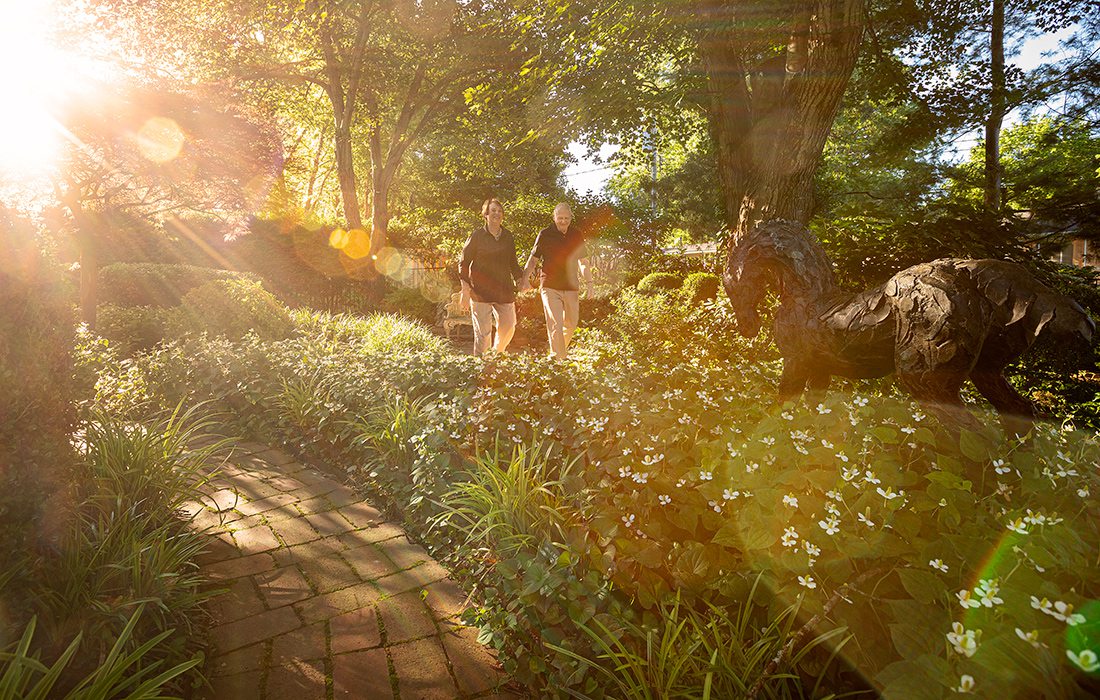 Photos by Brandon AlmsWhile Robert and Peg list England as one of their top sources for outdoor design inspiration, they also love filling their yard with mementos from their domestic travels. They came across this bronze foal statue in Santa Fe, New Mexico. “As a horse enthusiast and lifelong horse lover, it just drew my attention immediately,” Peg says. Purchase Photo 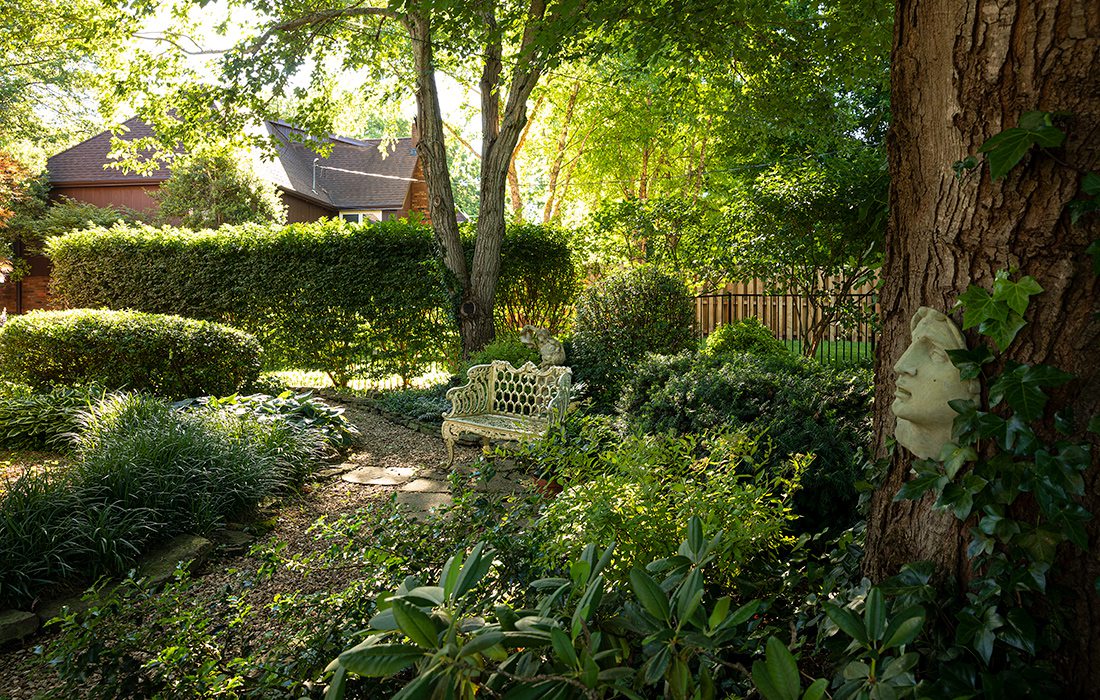 Photos by Brandon AlmsThe Carollas have worked for 40 years to achieve their current gardens. Purchase Photo 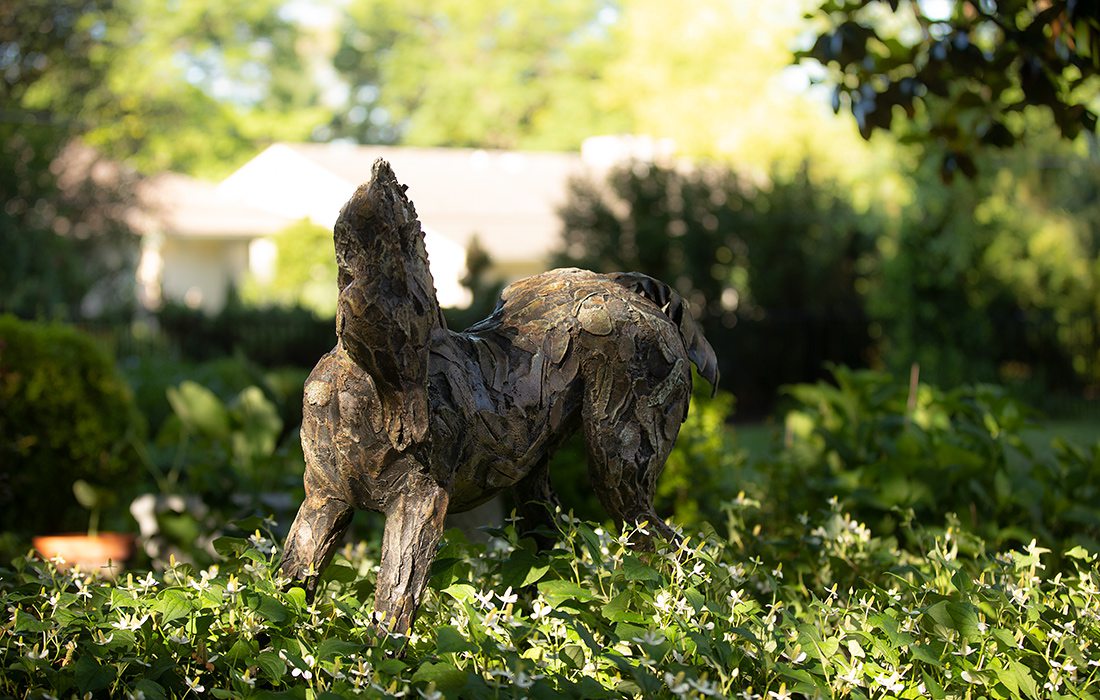 Photos by Brandon AlmsThe Carollas have a variety of sculptures throughout their gardens. Purchase Photo 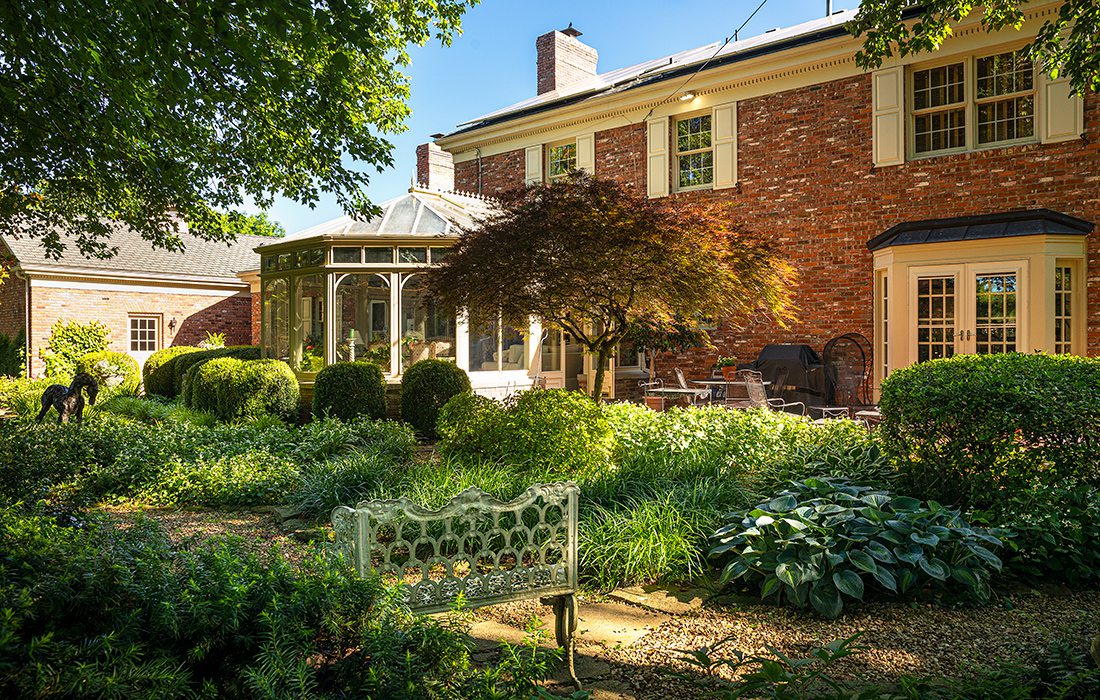 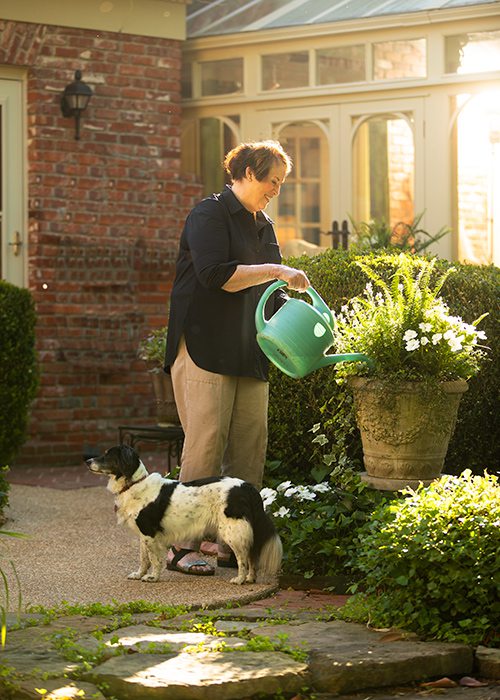 Photos by Brandon AlmsPeg and Robert Carolla own two dogs, Nena (a cocker spaniel mix pictured here) and Inga, who is a Pembroke Welsh corgi. Corgis have a distinct spot on their shoulders that resembles a horse’s saddle, called a fairy saddle. “The legend is that corgis are the favored mount for forest fairies,” Peg says. “I think of that as Inga goes out and plays in the backyard.” Purchase Photo

With a panoramic view of their backyard from the conservatory, the couple enjoys enhancing their outdoor space with blooms and lush greenery.

When they originally purchased the land to build their home, there was just one tree on the property, which had to be torn down to make room for the garage. Once Robert retired, the couple began taking on the majority of the gardening themselves. “We started from scratch planting flowers and trees, and it has taken 40 years to achieve what we’ve achieved,” Peg says. 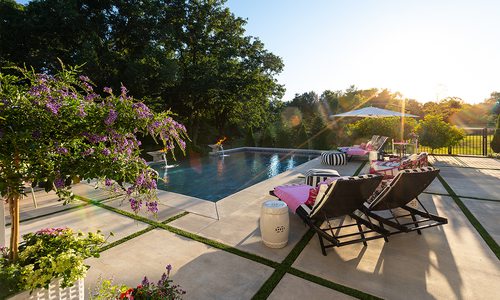 This Sun-Drenched Terrace is Perfect for Relaxing and Entertaining

Designer Susie Wieland helped these homeowners create the backyard of their dreams. From a pool with a vanishing waterfall to a covered... 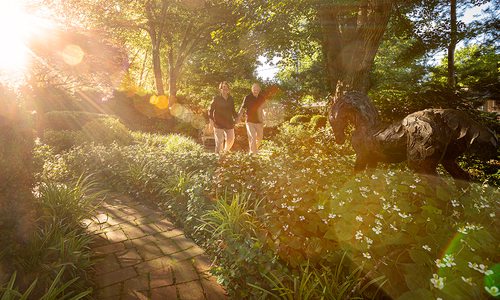 Through thoughtful planning and design, the outdoor spaces that surround our homes can feel like extensions of our living spaces. From lush... 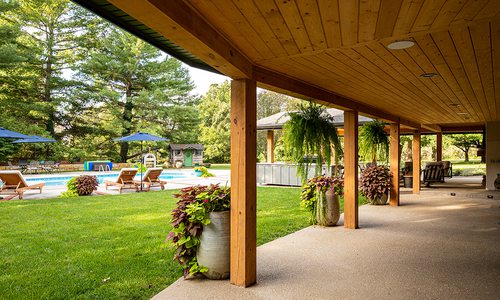 Between an outdoor living space complete with pizza oven and TV to a pool and an elaborate vegetable garden, this backyard has something... 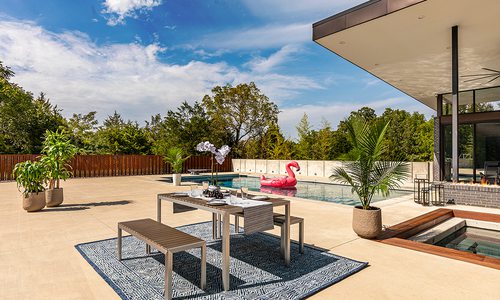